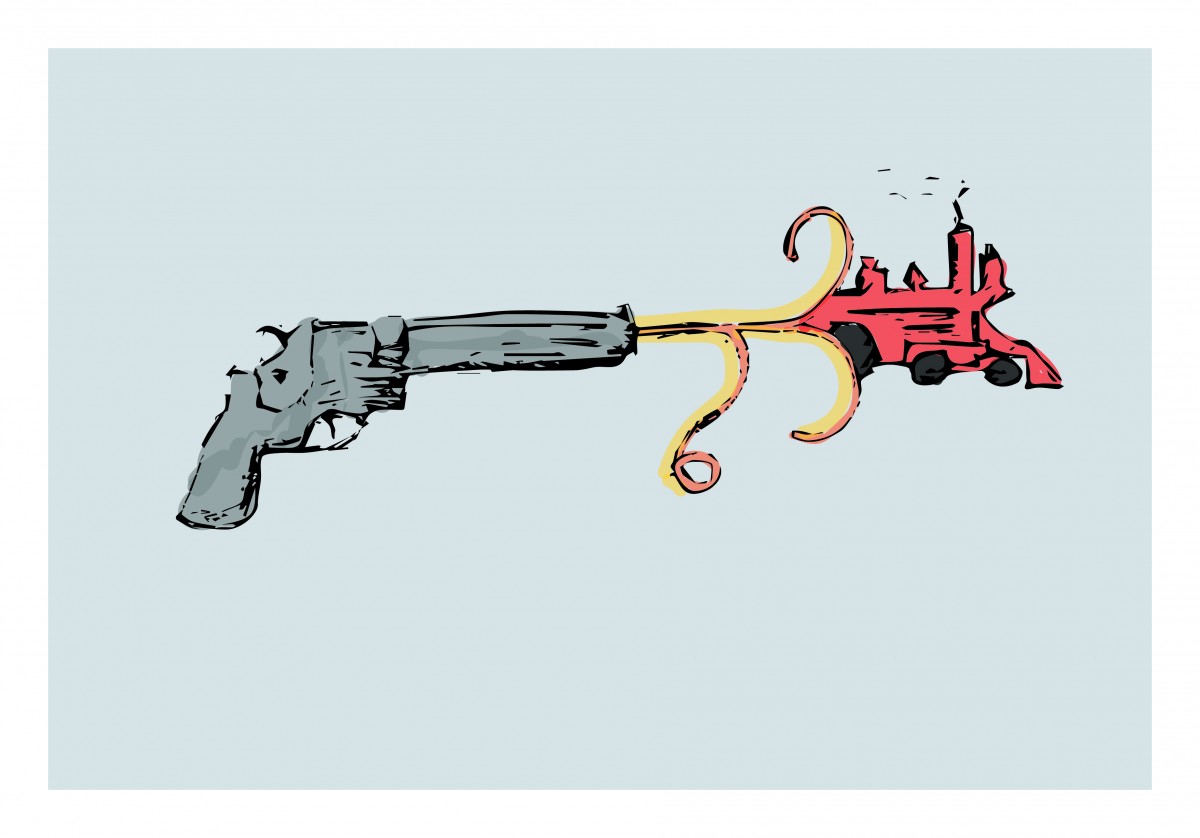 A selection from our “Anything Goes” call for submissions.
By Austin Berrier 1:
praise the almighty locomotive
which hurtles toward you now
down tracks forged in fire

an iron horse,
its mythical hooves furiously pounding pistons
into the hellfire of exhaustion,
the thunder of wheels echoing
as they turn endlessly
through horizons, speeding
like Pegasus once galloped
through life and landscape
into stars above

a sauna’s cleansing steam erupts
from its metallic nostril,
the scorched remains of organs
harvested from our mother
earth whose ashes now blend into air

you lie before me,
knots binding your body
to the hot rails and splintered wood
of the modern metallic cross
as I cross myself
and confess our sins
to a listening earth below,
an eager Gaia awaiting this purification
through punishment

2:
These ropes scratch pain into skin,
a satisfying tickle
only the silent stab of thorns can give

Eyes quiver to ask
only for something insignificant,
life itself
to awake from death
into life again

A whistle blows –
the noise of its scream
combines with last fragments
of breath, mixing
to harmonize with the wind

3:
Damn the cowardly locomotive
which nears you now
on tracks built on our peoples’ bones.

This is the flame of a false phoenix
being pressed
out by angry fingers,
a reversed baptism burning flesh
into ash, never to return.

Crime weaves itself into myth
like a careless blade,
cutting into the histories
of our ancestors.

And at long last
the mechanical demon rushes by,
the deliverer of death the horseman,
blood letting like sweet wine, creating
tiny cesspools of life
swirling down
into invisible cracks
only to be swallowed by
the pores of the earth.


Austin Berrier is a native of Arcadia, North Carolina, who splits his time in Blacksburg as a third-year student working in engineering science and mechanics and wandering the area as a common adventurer. He is usually most creative on his own at night, and his poem “Spaghetti Western” evolved from a short story written in second person. He admires the work of George Saunders and Kurt Vonnegut — specifically Cat’s Cradle, which he says changed his life. He also ascribes to Vonnegut’s theory that art is a “human way of making life more bearable” and that practicing it “is a way to make your soul grow.”

You may also enjoy