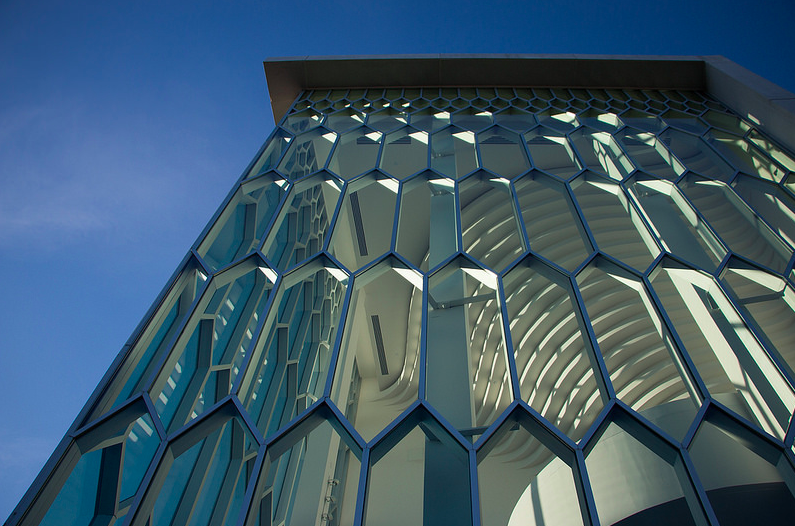 In their quest to be a globally recognized institution, Tech aims to boost the arts with a new community.
By Ian Beskin, Happenings staff writer Contact the Reporter 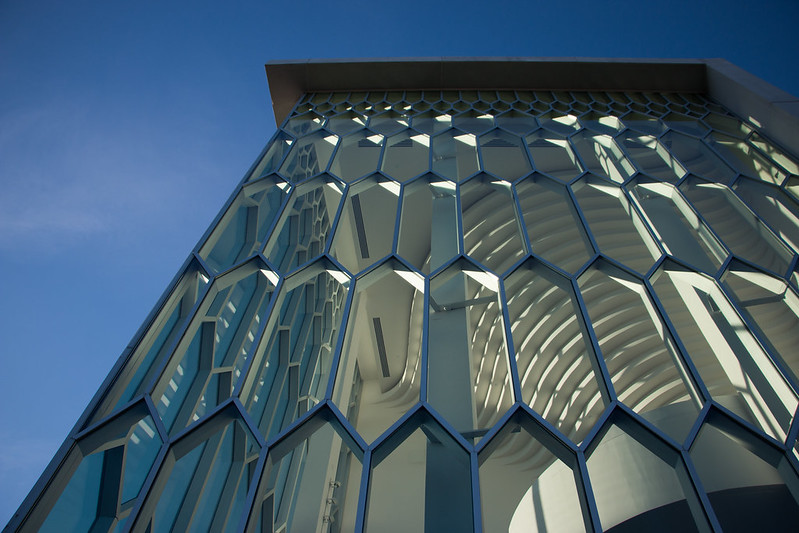 Virginia Tech’s long-standing reputation as a technical school is gradually being revamped by strong faculty-led support for the fine arts. The October 2013 opening of the Moss Arts Center — a 147,000-square-foot facility that houses the Center for the Arts’ exhibition program, a theatre, and a performance hall — was a major step forward for the arts at Tech. Now, faculty and administrators are looking to build on this progress with the planning of a new, interdisciplinary living-learning community (LLC) for artists.

A living-learning community is a group of people sharing similar majors, career paths, interests, or backgrounds living together in a dorm or hall. These communities can be found at universities throughout the country including Harvard, Yale, Vanderbilt, and Miami University to name just a few. Virginia Tech itself has nearly 20 LLCs, from engineering programs, Galileo and Hypatia to interdisciplinary groups such as the Honors Residential College. This new, yet-to-be-named LLC started with Matthew Ebert, who was a graduate student at the time of the proposal, but is currently a program specialist for learning initiatives within Student Affairs.

Ebert’s interest in this project stems from a desire to increase the prominence of the arts at Tech. Like many involved in the project though, the influence that art has personally had on him serves partially as the impetus for his efforts. While Ebert earned his Bachelor of Fine Arts in Drawing and Painting at Longwood University, he struggled to share his work with others. “It wasn’t until my senior year that I started to get involved with the people that I took classes with. It wasn’t until then that I started to show them the things that I was working on independently and get their opinion, their critique,” Ebert said. “I think if I was coming into college as a freshman, this would be a really attractive community to be a part of because the moment you step on campus, you have a place where you belong.” Ebert proposed the program to Tech’s Arts Policy Board, the committee that steers the direction of Arts@VirginiaTech. He has since been working to develop it along with many others in the fine arts programs at Tech. 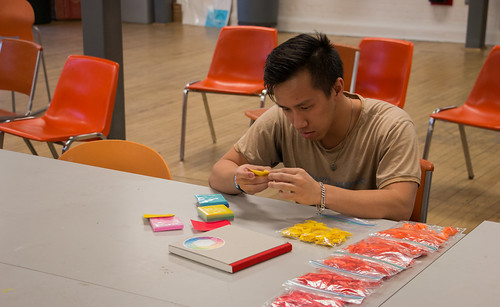 Sophomore transfer student and studio art major Julian Le works on a project for his Art and Design II class in the School of Visual Arts building. Le was working on a 1,000-piece art project made from folded paper cranes. At the time of the photo, he said he’d been working on the cranes for over 40 hours at least and had made about 300 out of 1,000. Photo by Scott Beaubien.

Despite the community’s heavy emphasis on the fine arts, it will not be exclusive to creative arts majors. Ebert explained that art is merely the common denominator of the students who will live in the community. Although the application process has not yet been finalized, several details are clear: the LLC will be open to all majors and will encourage interdisciplinary study and collaborative work among both students and faculty. Faculty may or may not live with the students in a residential college fashion, but they will be involved with the students to a high degree outside of the classroom. Moreover, the community intends to provide meaningful role models independent of the university by potentially connecting students with professional artists, music businessman, or gallery owners, among others.

Associate Director for Academic Initiatives James Penven was critical in the creation and development of 10 living-learning communities on the Tech campus. He’s now working to build this new community as well. Echoing Ebert’s commentary on interdisciplinary studies, Penven finds “tremendous value” in creating a space for students of all academic backgrounds to live and learn in together. He says that interdisciplinary, collaborative efforts would not only be encouraged through community ideals, but through tangible projects and interactions with professors. “Students could be co-creating along with faculty,” Penven said. “[Say that] we’re going to do a theatre production. Folks who are creative writers writing the script, you have folks that do graphic art creating some of the visual media behind it, folks that are designers to do costume or set design, light design, actors, a score for the music.”

Penven and Ebert explained that they envision the LLC as an environment that will allow students to take risks in other fields, broaden their understanding of their own art, and grow both as people and artists. Penven described a large group of people as “closet artists” who are artists at heart — perhaps they were in their high school orchestra or theatre — but hide it away or were afraid to pursue it due to job insecurity or pressure from peers. This was the reality for freshman music education and performance major and jazz minor Ted Alt. “I would love to be a performer,” Alt said, “but I know that teaching is the smarter decision economically.” Alt explained the reality of the situation using the example of a friend of his that lives in New York City and plays saxophone professionally who only gets to see his two kids and wife for about a month in the year. That kind of pressure and uncertainty in music performance has pushed Alt away from the stage.

This LLC aims to help its students overcome this image and to avoid economic insecurity within art industries. However, it is also designed to attract students who want art in their lives, but do not necessarily plan to make a career out of it. Penven explained that students shouldn’t have to live a bifurcated life in which being an engineer and an artist are two separate realms, but should rather be able to enjoy the benefits of being an artistic engineer. Engineering student Nick Corbin is a guitar player and singer in his free time and music has always been an important influence in his life. Despite wanting to pursue a degree and job in engineering, Corbin said that he would be interested in this community if he were applying again as a freshman. For Corbin, the community being interdisciplinary is a critical component. “I think being surrounded by people who are different from you is important,” he said.

Matthew Vollmer, director of Creative Writing at Tech and author of Future Missionaries of America and Gateway to Paradise, supports Penven’s appreciation of multidisciplinary learning. He explained that some of his best students can be and have been engineers or business students. He speculated that for some students with strict course schedules, their craving for artistic exploits are never truly satisfied. As a result, many non-arts majors perform exceedingly well in his classes simply because they wanted to write and hadn’t been given the opportunity before, as though their creativity were pent up and waiting to be released.

Ebert explained that the art focus of the LLC has the potential to seep out of the dorm community and further into the Tech and Blacksburg community at large. “There’s a lot of opportunity for a campus culture to be fostered and to influence students who maybe aren’t in that community to change the way they think about art,” Ebert said. Ebert, Penven, and Vollmer all agreed liberal arts and fine arts education are necessities for colleges, and they hope that this LLC and its inhabitants can encourage students at this college to value the creative arts more. 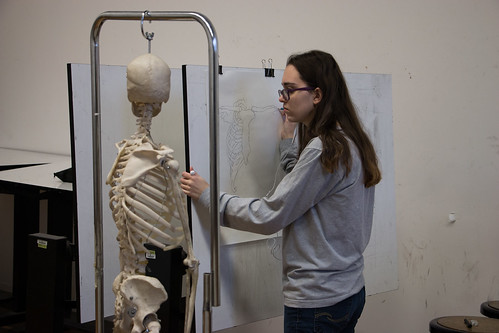 Freshman studio art major Jessie Almquist works on a drawing in the School of Visual Arts building. Almquist was working on drawing a rib cage as part of a project for Drawing II. Photo by Scott Beaubien.

Ebert expects the importance of art to grow both at Tech and throughout the country. “Outstanding arts programs very soon will be the mark of very innovative institutions,” he explained. He noted that higher education appears to be cyclical in its valuation of certain fields. For example, a good engineering program may be the mark of a great school right now, but that may change in a few years to biology, business, or art. Penven said that while the increased attention to fine arts at Virginia Tech parallels the institution’s goal of becoming a globally recognized university, the center of the movement is explicitly targeted at developing students. This LLC “aligns with the direction Virginia Tech is going,” Penven said.

Tracy Vosburgh, senior associate vice president for University Relations at Tech, added that a strong arts program is imperative for becoming a globally recognized institution. She said that the Moss Arts Center was created because “it was a gap in what we were providing for our students, our staff, our faculty.” She explained further that strong liberal arts and fine arts programs are a crucial component of education and creating successful students and future leaders. Vollmer echoed her sentiments. “I think a lot of people here recognize that Virginia Tech, in order to become a real leader in education, needs to be creating students that can appreciate the importance of art,” he said.

Virginia Tech’s image as a university may be more difficult to change than the actual accessibility of art on campus, however. “I don’t think you’ll ever reach a point where you say Virginia Tech and people think ‘art,’” Corbin said, even as the presence of art on campus grows in the coming years. He further posited that Virginia Tech is an “engineering school” and that the perception would likely never change. Vosburgh on the other hand, responded that “it is a narrow way of describing Virginia Tech.” Only time will tell how Tech’s image will evolve. One thing is certain, however: this living-learning community for artists could be a significant catalyst in driving a change.

The project is early in the planning phase and many of the details, like where the students will be housed and how many of them will be in the program, have yet to be ironed out, but the greater picture is already drawn. Students have recently become incorporated in the planning process for the LLC and will continue to be included in future conversations and major decisions, Ebert said. With each day, the finer details are being finalized and the project is becoming more grounded. Before too long, aspiring artists and art lovers alike will have a new home at Tech. 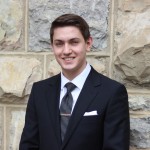 Ian Beskin is a freshman double majoring in finance and accounting, serving as the business manager for The Pylon. He spends a lot of time reading, watching movies, and worrying about the future. Ian would like to become an investment banker several years down the road, get an MBA, and move to New York City.