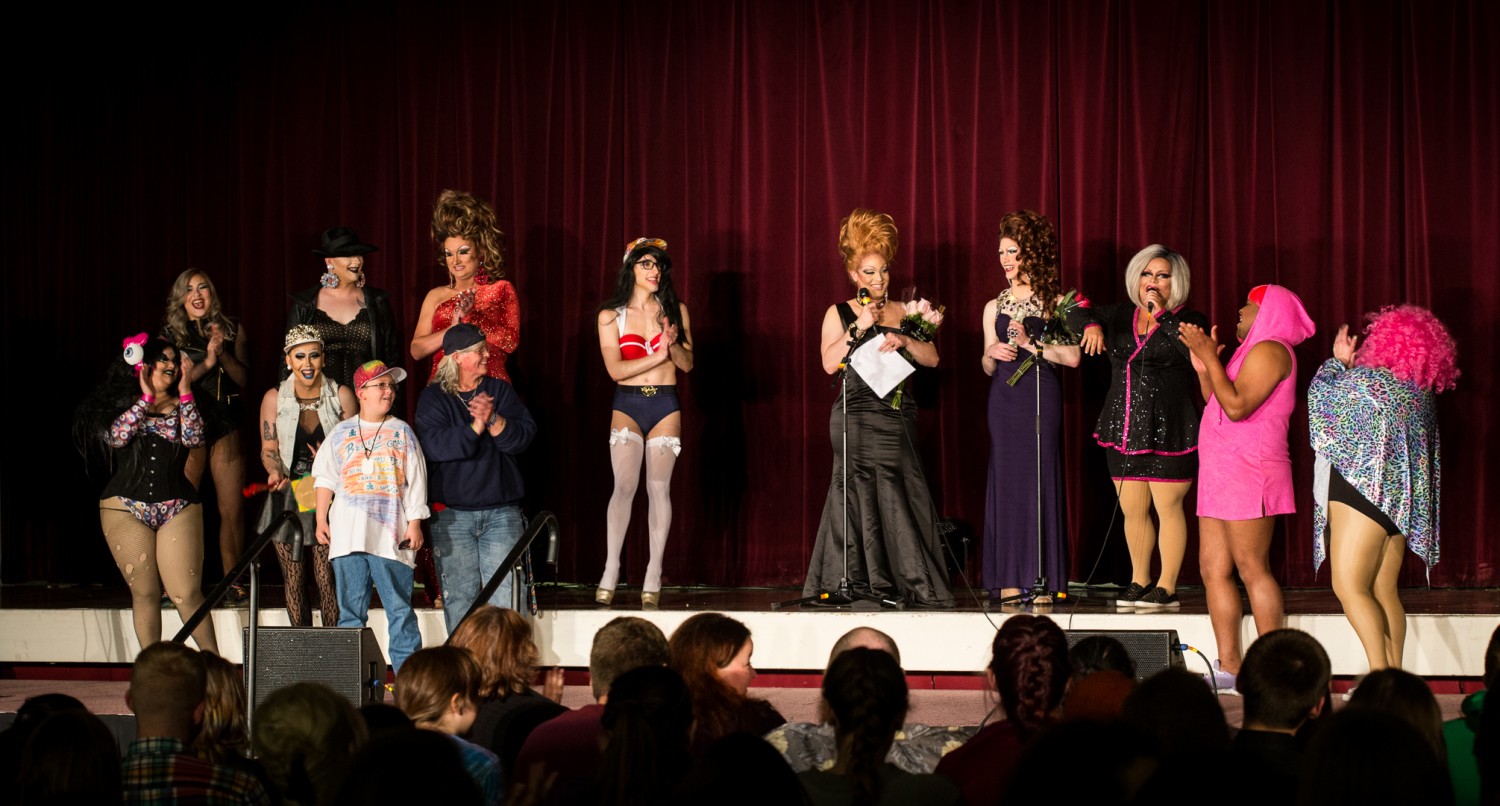 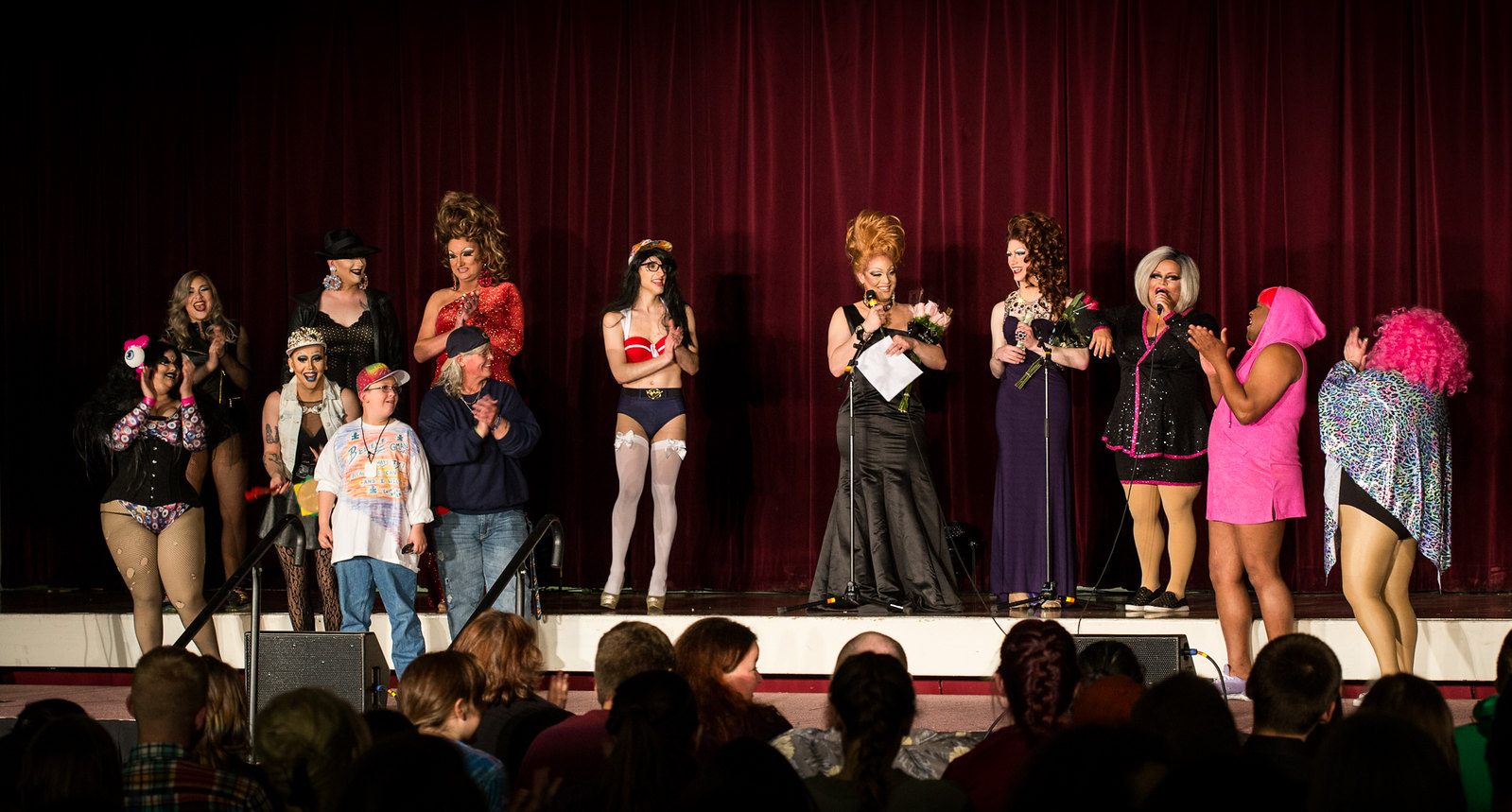 Continuing the rich tradition of drag in the LGBTQ+ community, HokiePRIDE of Virginia Tech held its semesterly charity drag show this past Thursday in order to raise money for the Roanoke Diversity Center, a group dedicated to the empowerment of LGBTQ+ individuals in Roanoke and surrounding areas. The event headlined Ginger Minj—a comedy queen from Florida well known for being runner up on season seven of RuPaul’s Drag Race—as well as working queens from Roanoke and Tech students who partake in the art of drag. 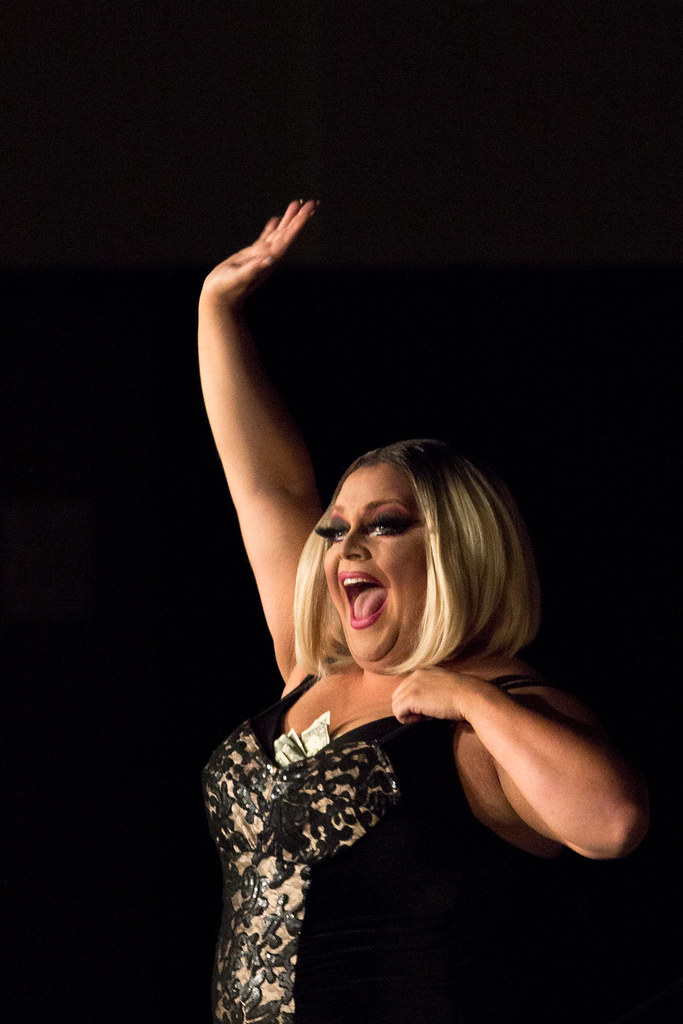 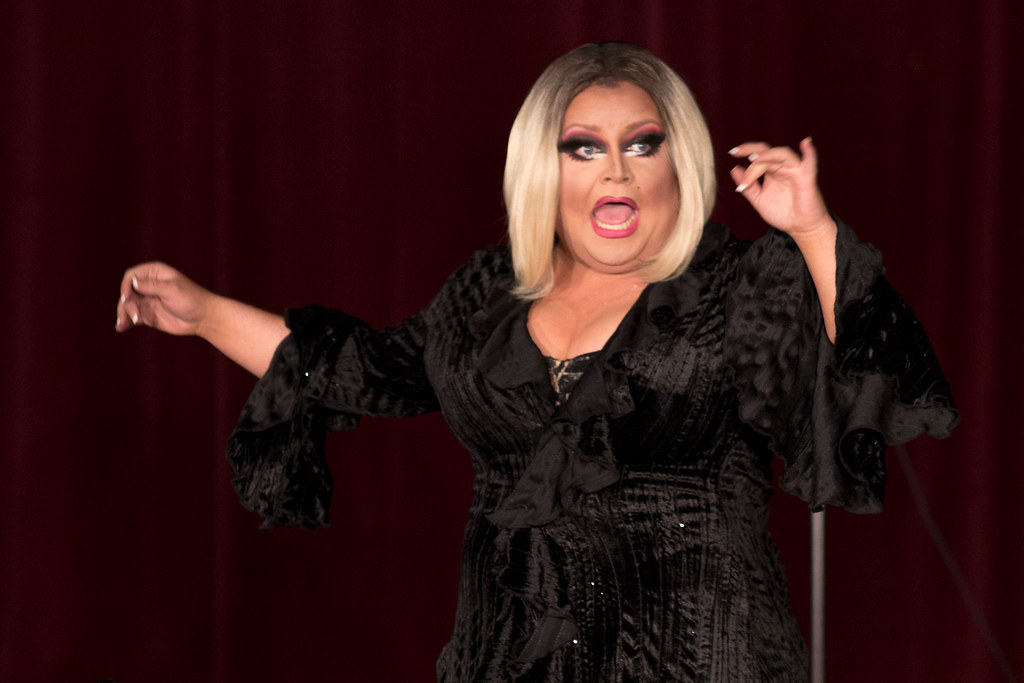 Ginger Minj works the crowd with her comedic postures and expressions. 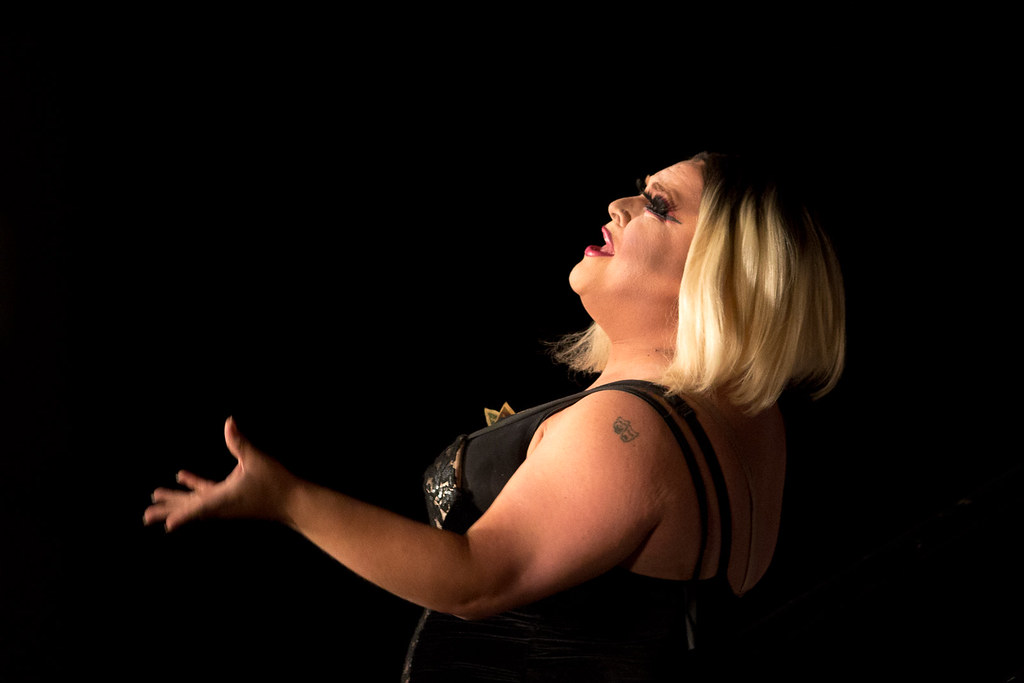 This semester, HokiePRIDE brought Ru-Girl Ginger Minj in from Gatorland to host and perform in the show. Before being known for her role in season seven of Drag Race, Ginger Minj was famous for being the Comedy Queen of the South and holding the titles of Miss Gay United States in 2013 and Miss National Comedy Queen in 2012.

If you want to get a feel for Ginger’s style and to see her perform a variation of one of the routines performed by her at Thursday’s show, you can see the video from Drag Coven below.

“I’m a crossdresser for Christ. I’ll have you down on your knees and begging for Jesus in a minute.” Ginger Minj

Drag and Its History

Many people believe that queer culture in the United States largely did not exist until the 1969 Stonewall Riots ‘officially’ started the long fight for LGBTQ+ rights; however, a closer examination of queer history in the United States reveals that cities like New York had rich underground queer cultures long before the pivotal events of Stonewall that included male beauty contests, long term monogamous relationships, various sexual subcultures, and, of course, drag.

Now I know many of you may be thinking, “Alright so drag is an art form with many different styles and it has a rich history in the LGBTQ+ community, but what exactly is drag?” That’s an excellent question. Let’s turn to the Gender Equity Center of UC Berkeley for an equally excellent answer:

Drag: The act of dressing in gendered clothing and adopting gendered behaviors as part of a performance, most often clothing and behaviors typically not associated with your gender identity. Drag Queens perform femininity theatrically. Drag Kings perform masculinity theatrically. Drag may be performed as a political comment on gender, as parody, or simply as entertainment. Drag performance does not indicate sexuality, gender identity, or sex identity. 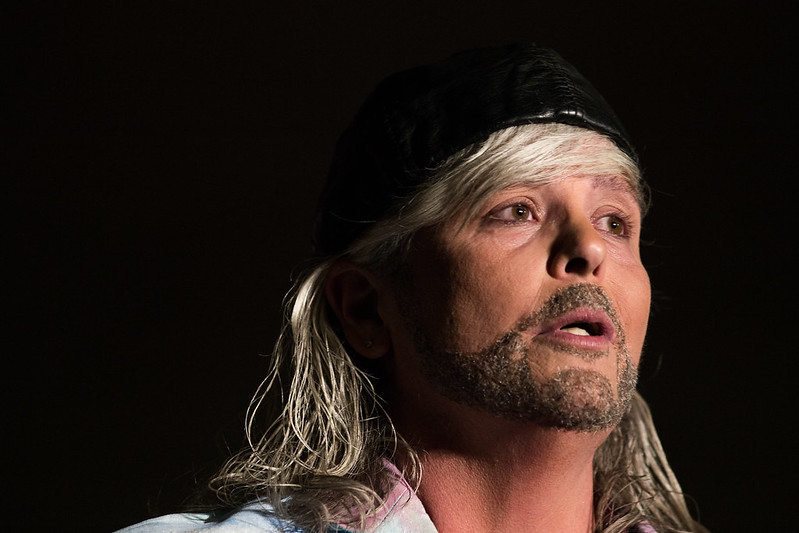 Up until this point, we have been focusing on drag queens, of which the HokiePRIDE drag show featured many. However, an often less talked about and publicized component of drag culture, highlighted by the Gender Equity Center’s definition above, is the drag king. As you might expect, a drag king is the opposite of a drag queen, but it is important to note that they are an underrepresented part of an already underrepresented culture.

Codan Haze, seen above, is an example of a drag king. He performed two numbers at Thursday’s show, and has been actively involved in past HokiePRIDE shows as well as Pride events for Roanoke. Codan Haze’s son is also a notable presence at HokiePRIDE drag shows because he wears a shirt that says “Codan Haze is my Mama” and is often the first person up to tip the performers.

Just like drag queens, drag kings have played an important, and often integral, part in queer history. In fact, if it were not for Stormé DeLarverie—a butch lesbian and drag king often credited with throwing the first punch of the Stonewall Riots—Sylvia Rivera—a Puerto Rican drag queen and trans woman—and Marsha P. ‘Pay it No Mind’ Johnson—an African American drag queen and trans woman who is credited with throwing the first shot glass of the Stonewall Riots (known as the shotglass heard around the world—the Stonewall Riots may have never came about when they did.

It was a rebellion, it was an uprising, it was a civil rights disobedience—it wasn’t no damn riot. Stormé DeLarverie

Now, I’m sure some of you more intimate with queer history or active with trans issues are raising your hands right now, so let’s clarify a few things for everyone else. First, being a drag queen or being a drag king is not the same as being part of the trans community. Drag identities are personas—they are a face that people put on to entertain—just like an actor or actress assumes the role of a character. This being said, there are overlaps between the two, and there are times in history when these overlaps have been more prominent or more significant. For instance, going back to the 1960s, individuals like Sylvia Rivera or Martha P. ‘Pay it No Mind’ Johnson are examples of people who both performed in drag and also were part of the trans community.

Now, some may argue that drag culture in the 1960s and 1970s was a place for trans people to exist before labels like trans woman or trans man came about, and, while this is arguably true, it ignores that cisgender males and females were and always had been involved with the drag scene up until that point. Being a drag performer and being trans are not the same thing; however the two often overlap in complex ways. Ultimately, the difference between the two is best described by drag queen and trans woman Monica Beverly Hillz: “Drag is what I do; trans is who I am.”

In addition, others may argue that drag—and drag queens in particular—often makes a mockery of women. However, the point of drag is to mock the traditional binary of gender that is so ingrained in our society, so queens that make a ‘mockery of women’ are doing so in a satirical sense in the hopes that their art will change societal norms.

Drag is what I do; trans is who I am.Monica Beverly Hillz

As with many subcultures, drag culture often influences mainstream popular culture in ways that many people are unaware of. For example, the Disney villain Ursula was based off of a famous 20th century drag queen named Divine.

Another huge area where drag culture has influenced mainstream popular culture is makeup artistry. ‘New’ Instagram trends like glitter beards, glitter brows, the Kim Kardashian extreme contour, baking, or even something as simple as using full coverage makeup all have their origins in drag.

Drag has also notably influenced the fashion world, and one need look no further than Lady Gaga or Cher to see this. As the age old adage goes, a picture is worth a thousand words, and some of the night’s best looks prove it. 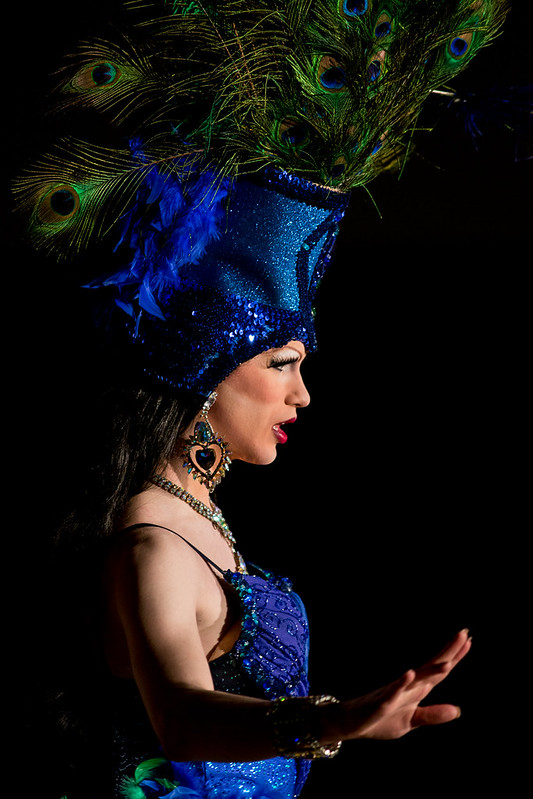 Amanda Westbrook works her headdress and the audience. 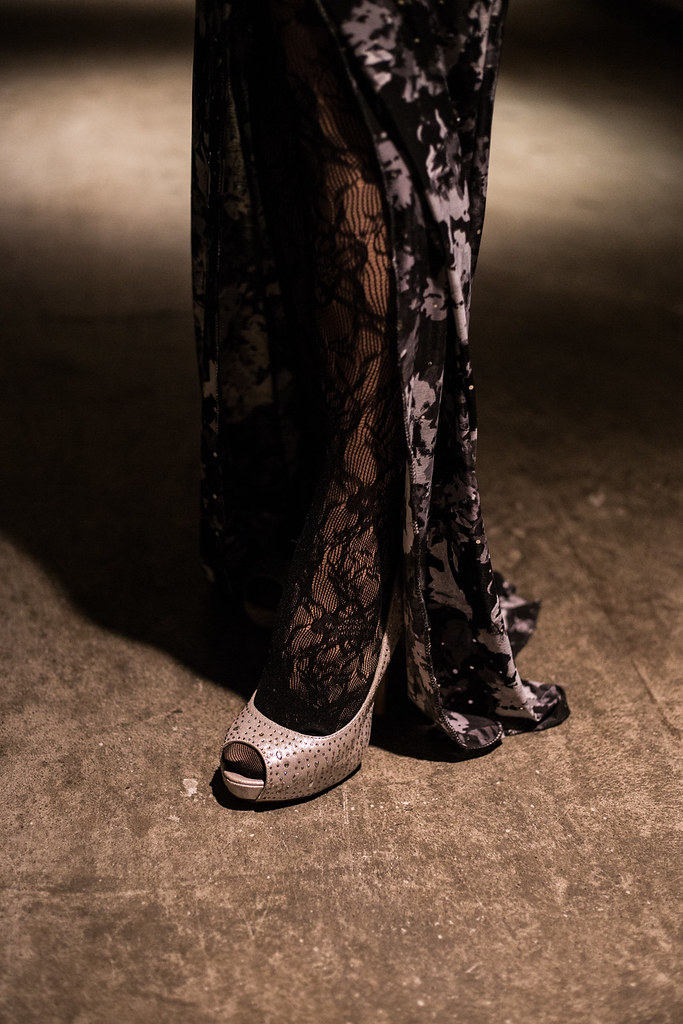 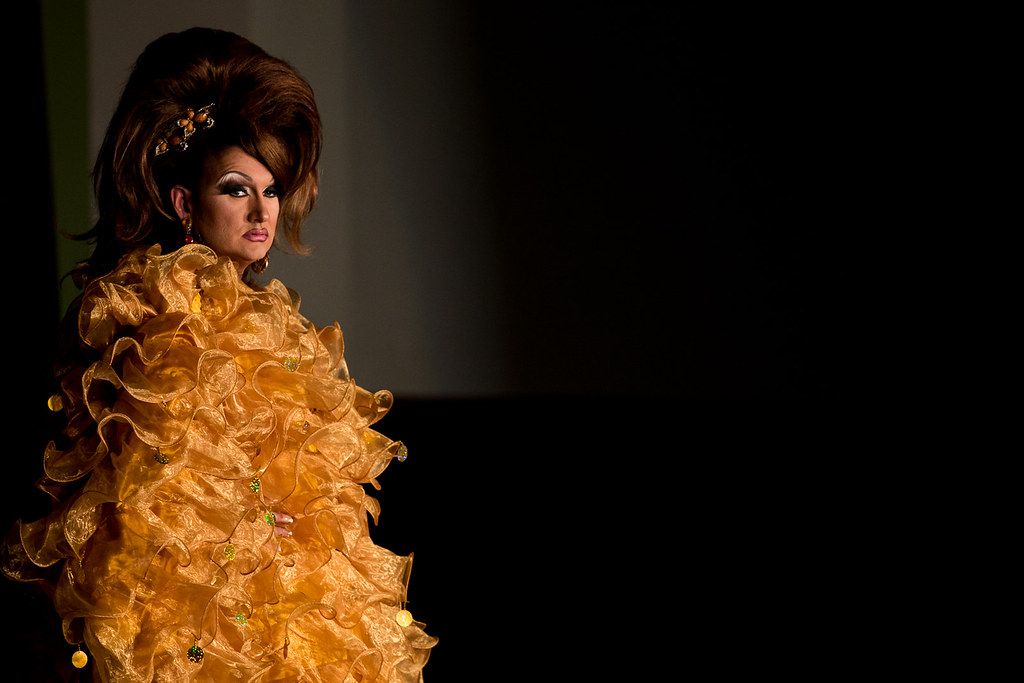 Taylor Made shows what classic drag is all about. 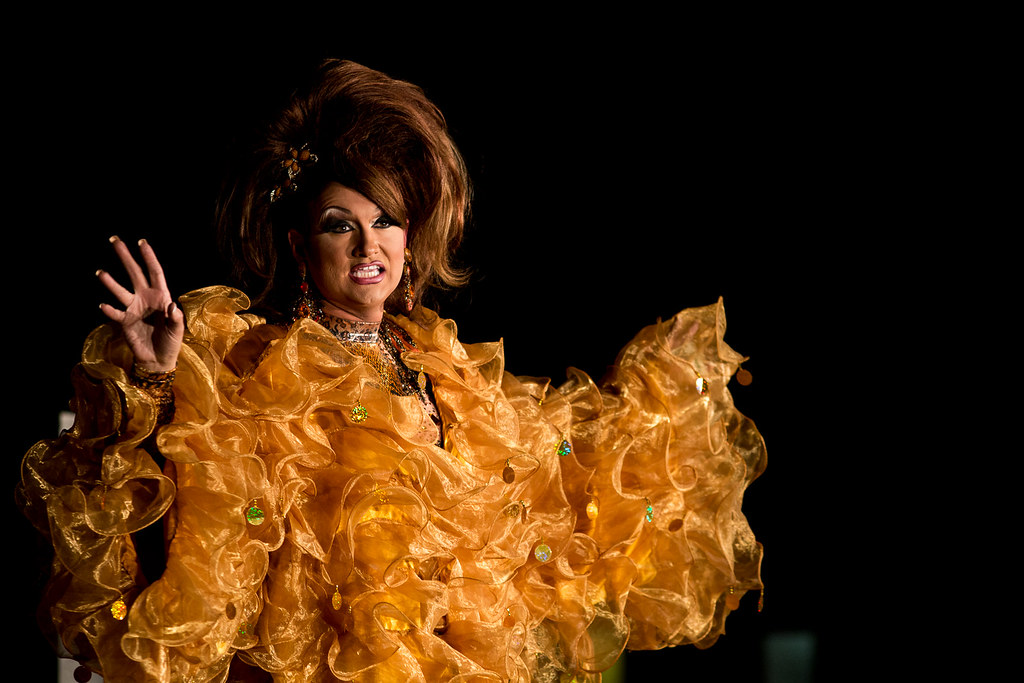 If you look closely, you can see the layers of Taylor Made’s outfit. 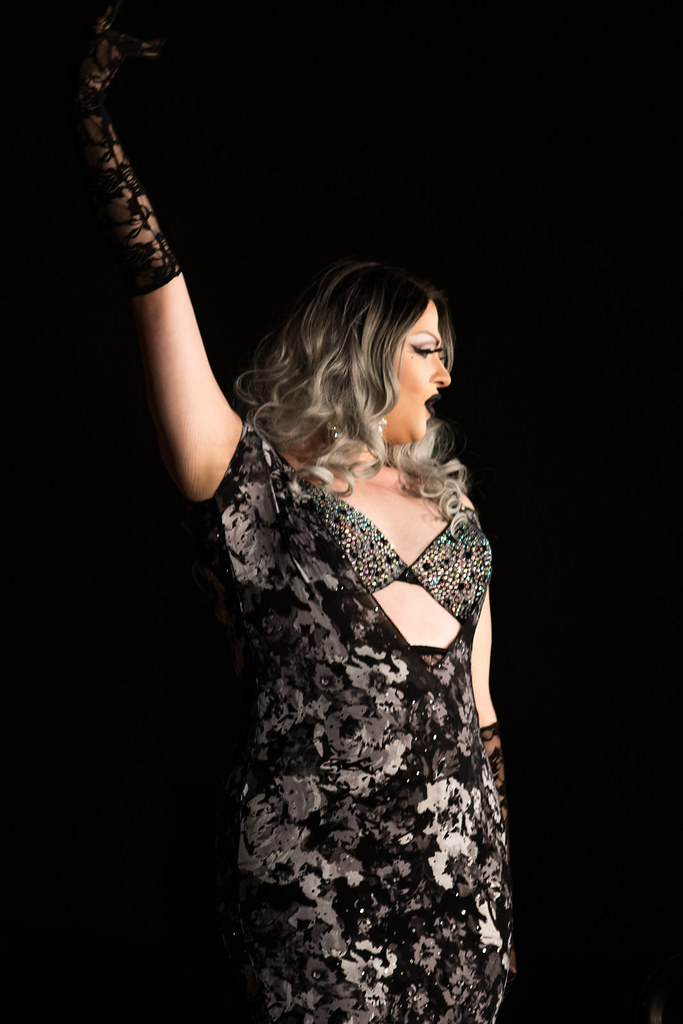 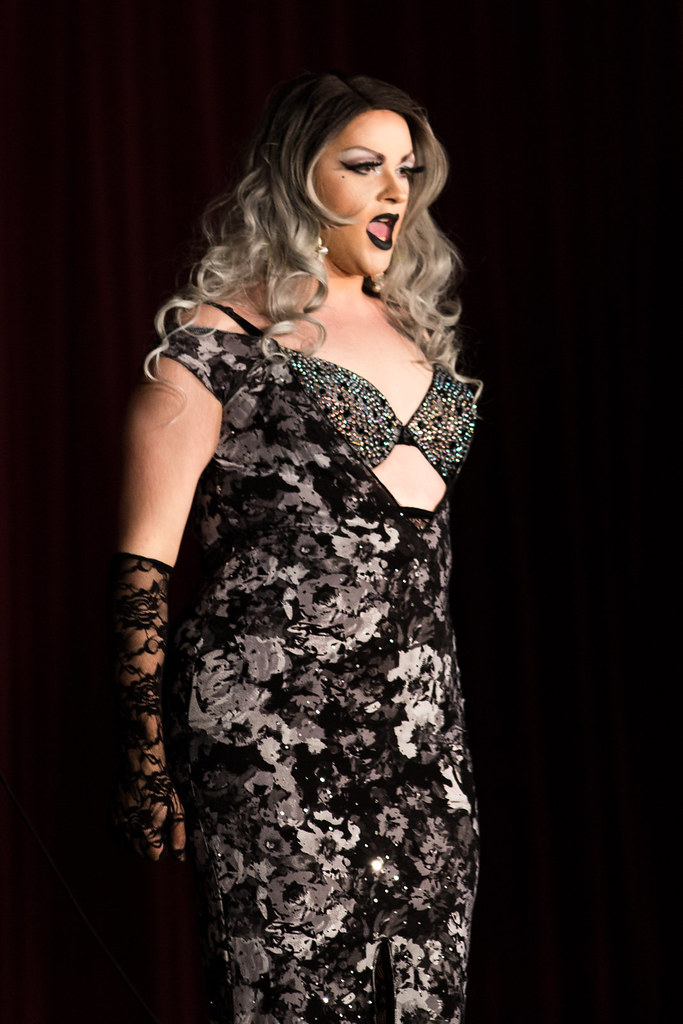 The hair and makeup complete the look. 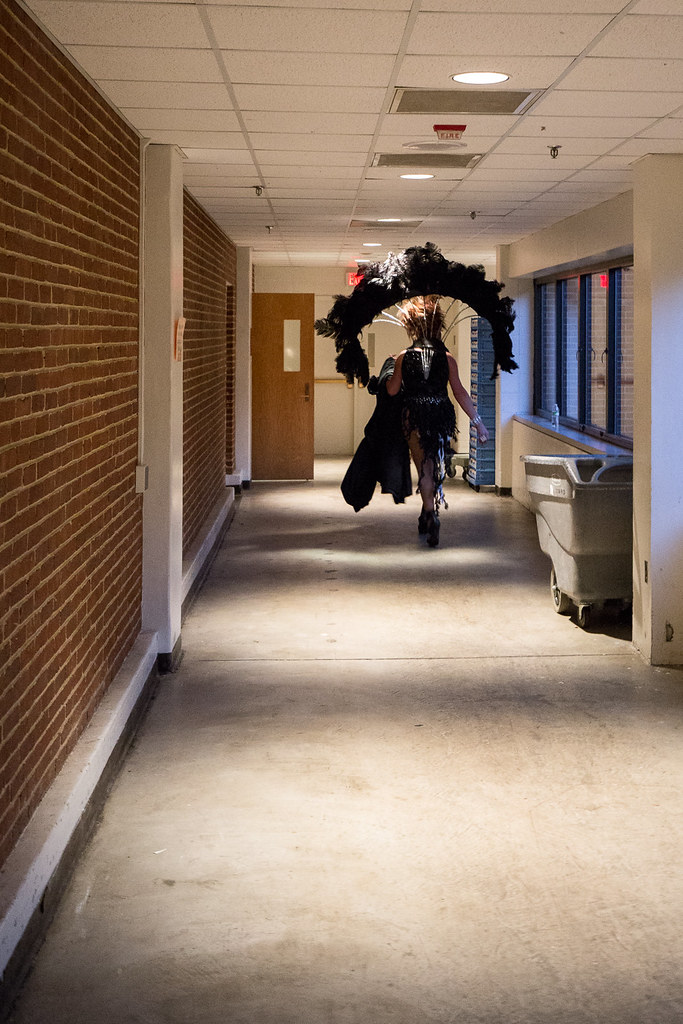 Taylor Made exits the ballroom wearing a feather-piece of her own. 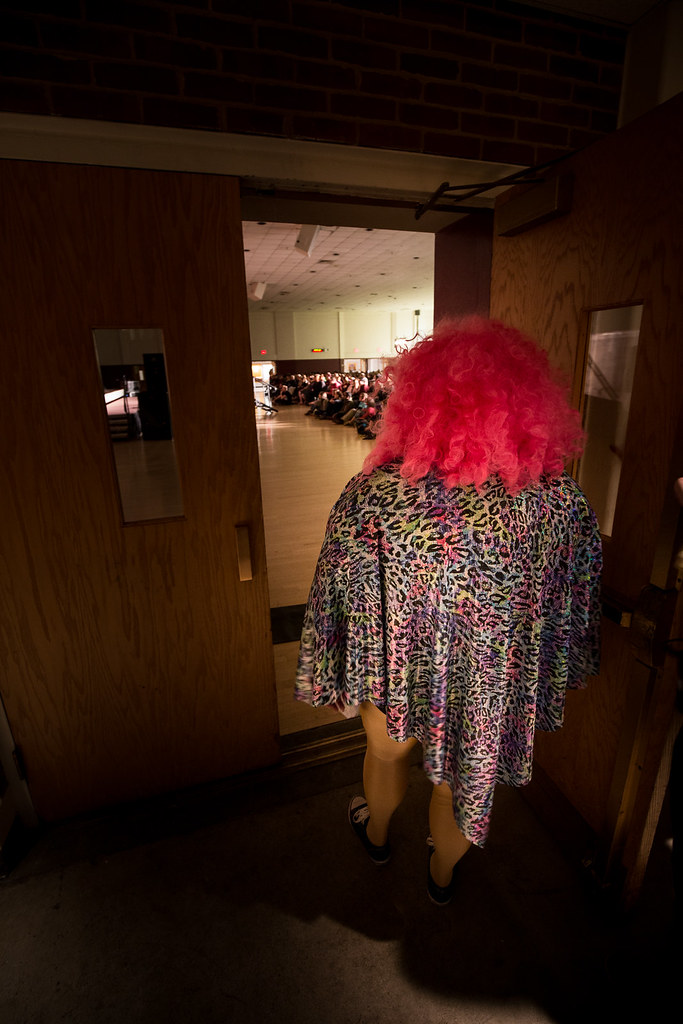 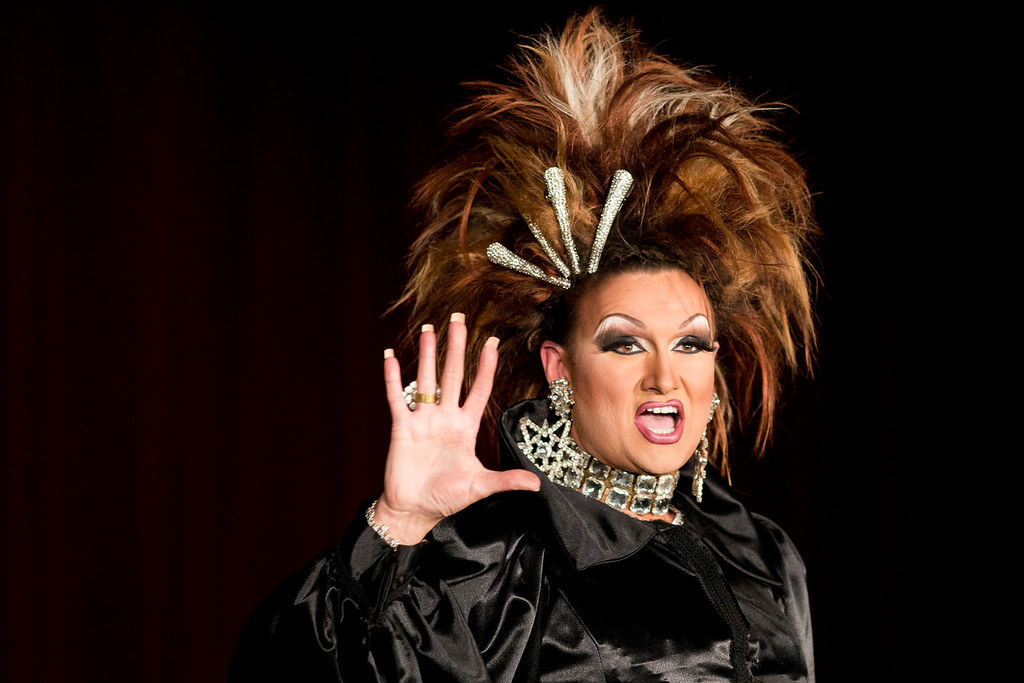 Another classic look from Taylor Made. 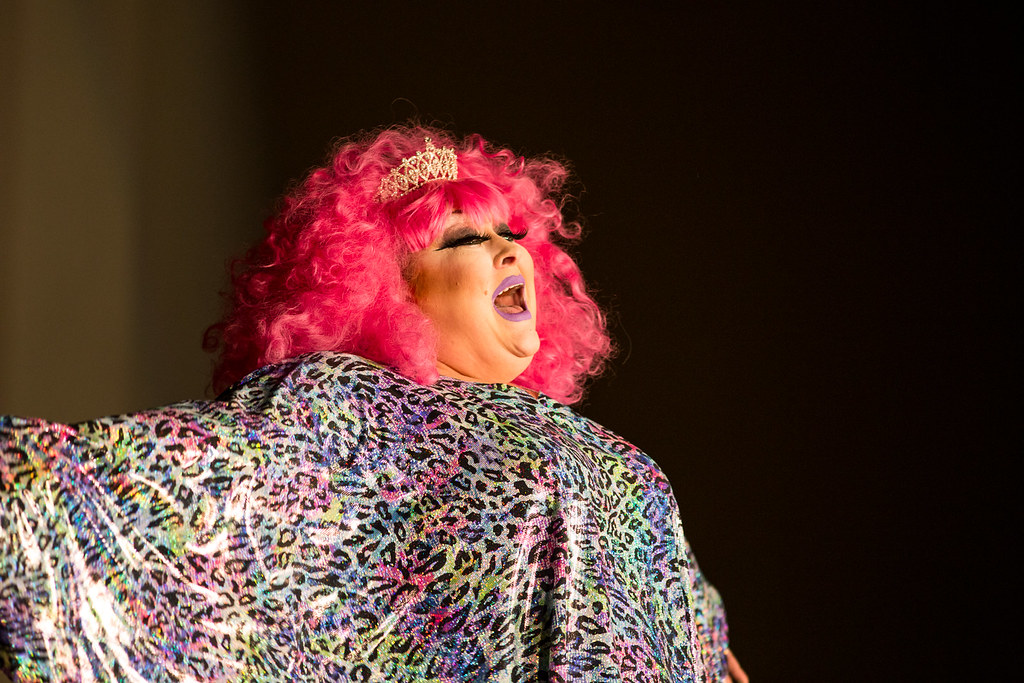 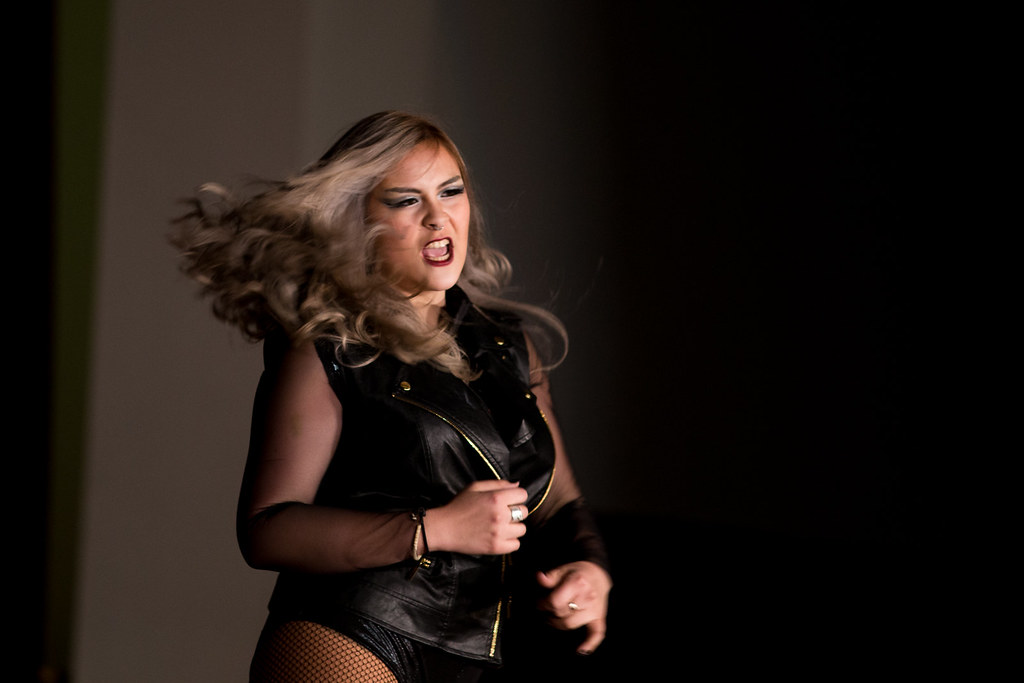 Leather and fishnets are always a go-to. 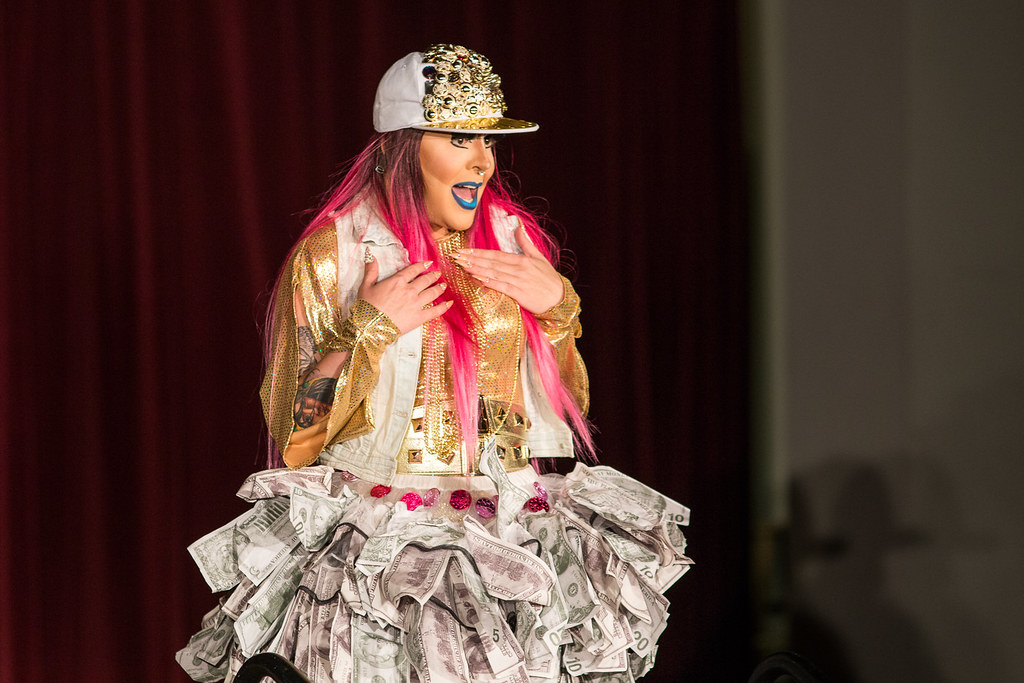 Drag queens’ outfits often involve a lot of creativity. The money skirt goes perfectly with the lip sync of “Bitch Better Have My Money.” 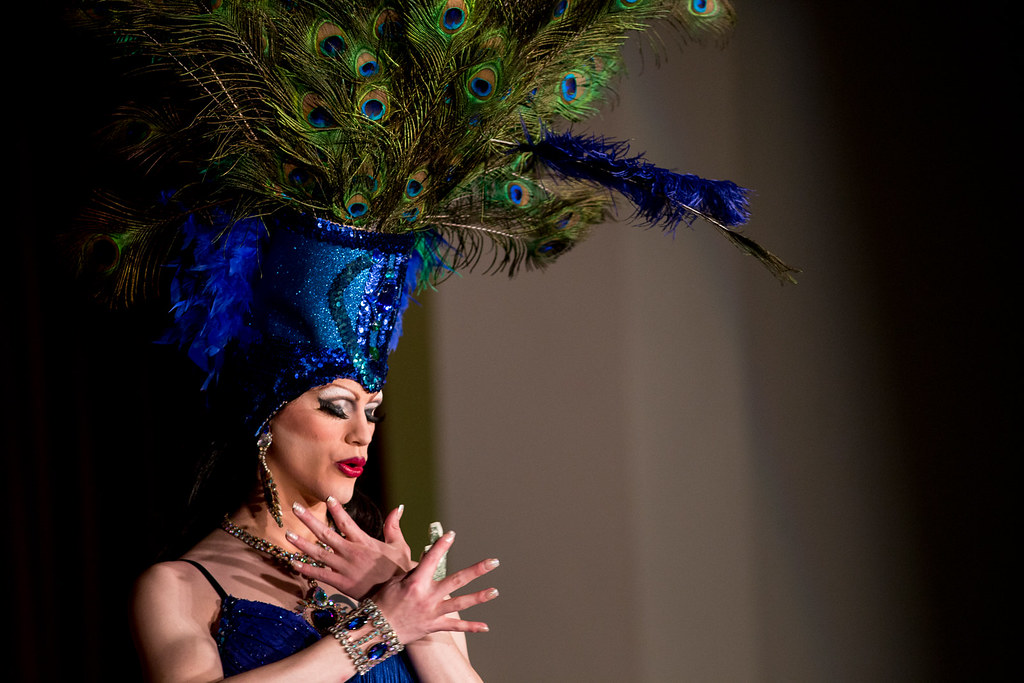 Feathers and headdresses are also classics in the drag world. 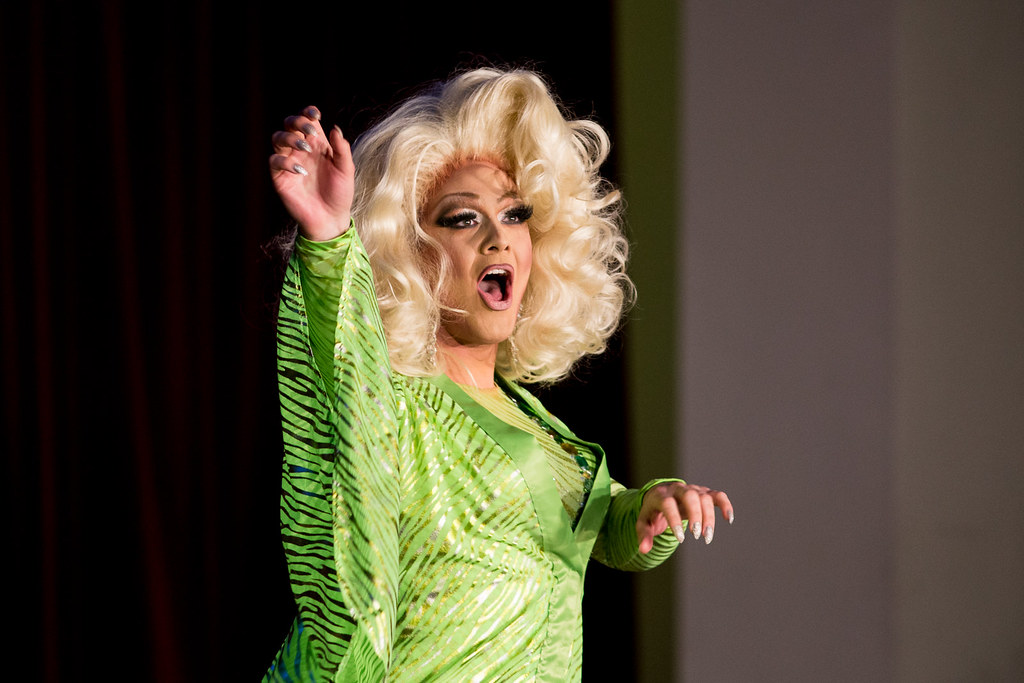 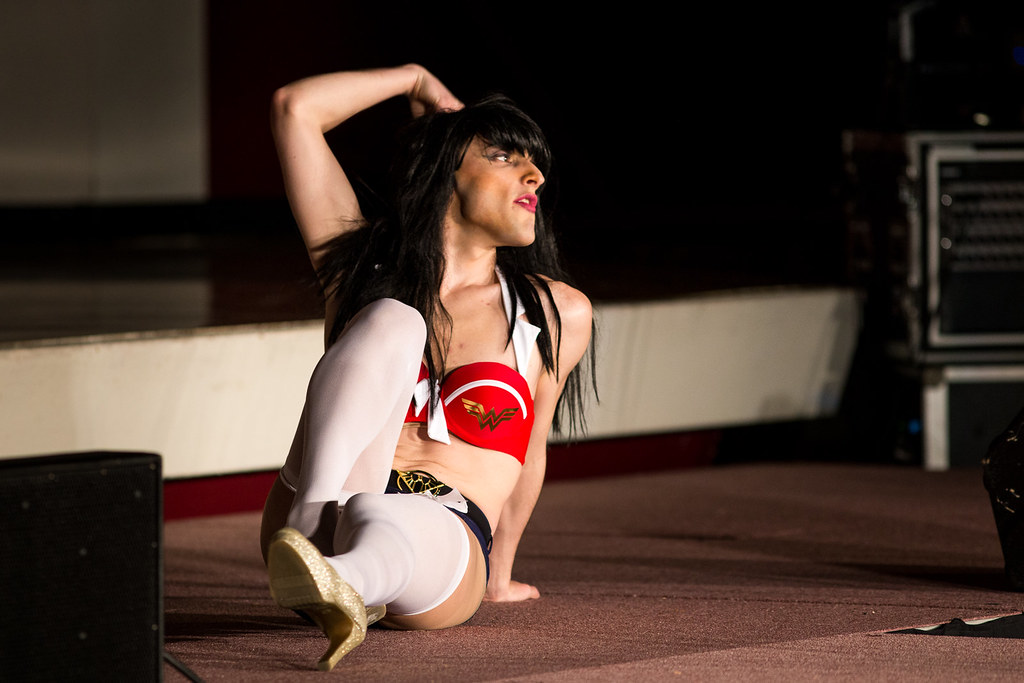 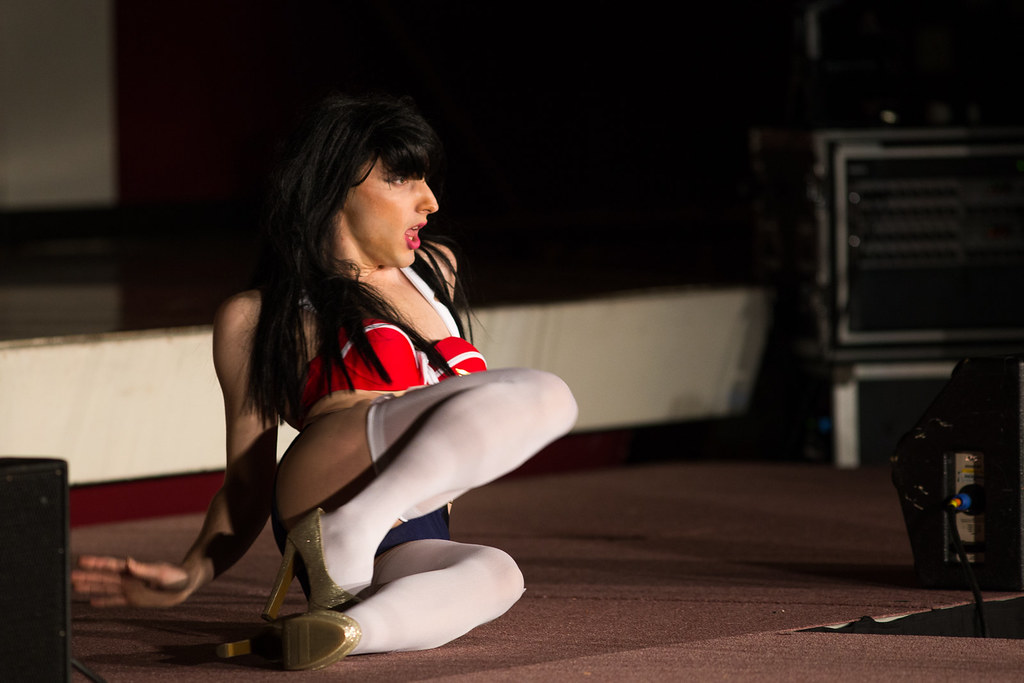 As mentioned earlier, the drag show put on by HokiePRIDE is a charity drag show. This semester, all of the donations at the door and the tips given to the queens went to the Roanoke Diversity Center. A representative from the center was present at the show to inform the audience on the three main areas that this money would be put toward: 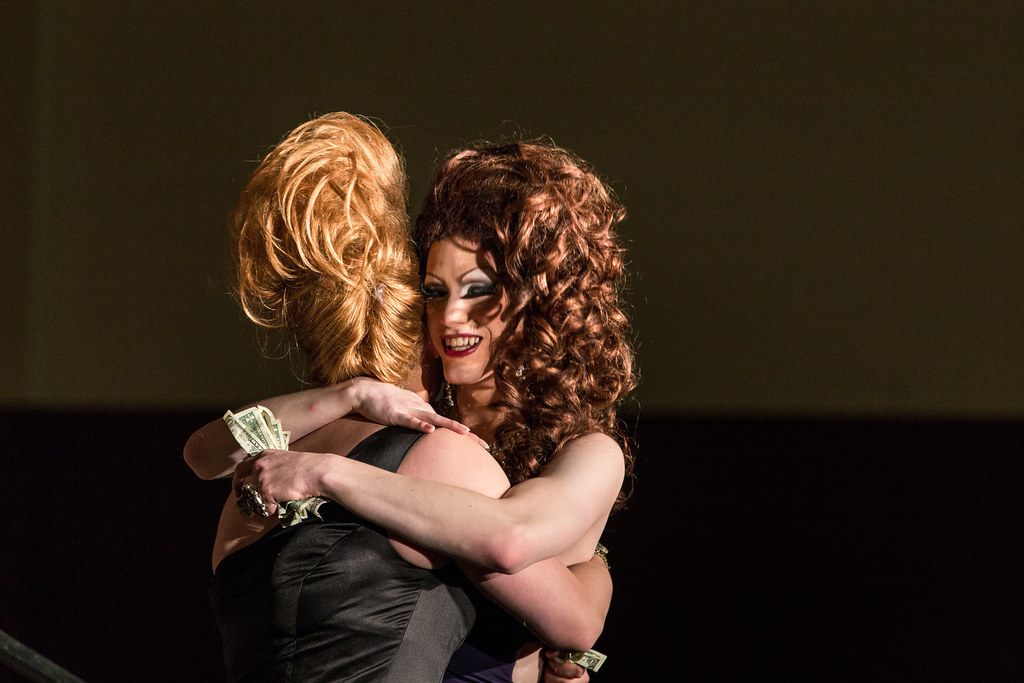 Ultimately, HokiePRIDE’s spring charity drag show raised over $1,500 for the Roanoke Diversity Center, and left the audience with an array of emotions ranging from amusement at the performances to sentimentality for the final number of the night, performed by Anita Drank and Amanda Westbrook—their final performance as Tech students. 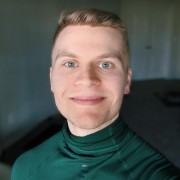 Andrew Pregnall is a native Northern Virginian who ventures down to the ‘Burg every semester to study Microbiology and History. They enjoy talking about social and political issues from around the world, and hope to somehow apply this passion in their future. When they leave Virginia Tech, Andrew hopes to get a puppy and pursue a career in the culture and practice of medicine. 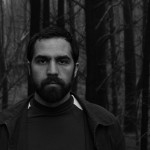 David Greenawald is a staff photographer and designer for The Pylon. He is an alumnus of the Virginia Tech Department of Geosciences.

FOR YOUR CONTINUED READING